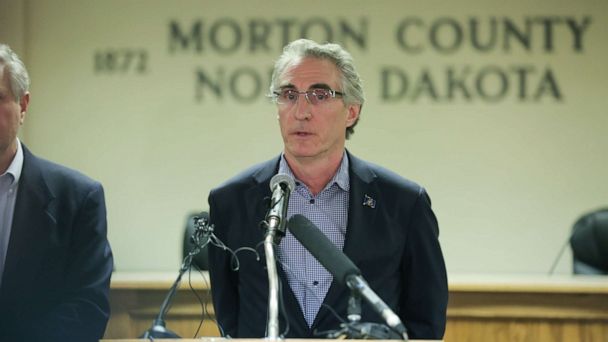 North Dakota Gov. Doug Burgum, a Republican, went against his party on Thursday in a powerful rebuke against an anti-LGBTQ resolution that was passed by hundreds of Republican legislators.

Burgum denounced the controversial resolution, which states that "LGBT practices are unhealthy and dangerous, sometimes endangering or shortening life and sometimes infecting society at large," in a lengthy speech, calling it homophobic and divisive.


"As I've long said, all North Dakotans deserve to be treated equally and live free of discrimination," Burgum said in statement. "There's no place for the hurtful and divisive rhetoric in the NDGOP resolutions."

The GOP-led legislature voted in favor of several dozen resolutions -- statements of policy for the state's Republican Party -- that claim to reinforce the state's conservative morals and values on marriage, which it defines as a union between one man and one woman, state documents show. The resolutions also reject laws that protect groups based on sexual orientation and gender identity, according to the documents.

"The resolutions were presented for an up or down vote, and no one resolution was voted on individually," Corby Kemmer, executive director for North Dakota's Republican Party, said in a statement Wednesday. "The intent of the delegates was to stand up for individual and religious liberties, and, unfortunately, this language falls woefully short of that goal."

"We regret any offense this may have caused, and we will be reconsidering this resolution at a future meeting to bring it more in line with what delegates were attempting to communicate," he added.

Opponents of the resolution package have characterized it as a list explaining why LGBTQ protections would harm the general society.

Among other controversial statements, the documents state that: "SOGI [Sexual Orientation and Gender Identity] bills grant protection to voyeurs who wish to prey on members of the opposite sex."


It's unclear if the resolution will be reconsidered. The GOP-led state has defeated several high-profile measures over the years that aimed to ban gender-based discrimination in addition to fighting against protections for members of the LGBTQ community.

State Rep. Josh Boschee, a Democrat and the first openly gay member of the North Dakota legislature, said the resolutions are made up of bold lies.

"The @NDGOP thinks NoDakotans like me are only interested in recruiting young people to a lifestyle, protecting bathroom voyeurs & infecting society. Is this how my legislative colleagues feel? Is this how Gov. @DougBurgum feels?" he tweeted.

"Thank you to the @NDGOP lawmakers who have started to speak out against this disgusting language within your party's platform," Boschee said. "I hope you'll do so earlier in the process next time & work harder to reach out to LGBT NoDakotans to hear the issues important to us & our families," he added later.

The package of resolutions was approved 621-139 after a tally of April's mail-in vote.